Archive for the category “polls”

Help Me Finish Something! 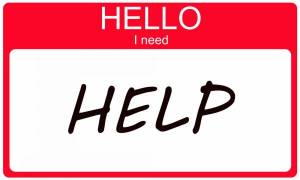 If you’re anything like me (and if you are, you have my deepest sympathies) the draft section of your blog’s dashboard is littered with unfinished posts.

After tirelessly combing through dozens of drafts (for at least 10 or 15 minutes) I came up with this short list of possible drafts to finish and post.

I’m a Peon: At the time there seemed no need to finish this; it just seemed too self-evident.

Mad Scientists Living Under Oprah’s House: This was to be a post about how Oprah is genetically engineering a race of super smart and evil monkeys to help her take over the world. Again, just too self-evident.

I’m a Moron #Yolo: I had seen a tweet that read: Just took a dump on my bosses car. #Yolo. I imagined a post containing a series of subsequent tweets from this person, ending with the tweet: Just got to know my new cellmate Brutus and he’s roughed handed. #Yolo.

A Little Wrong or Horribly Wrong: This post stemmed from my overhearing a patron in a dining establishment complain that their order was horribly wrong because they received ice tea rather than lemonade. My supposition was that receiving ice tea rather than lemonade is only a little wrong. Had they received a glass of antifreeze or hemlock or alpaca pee, then their order would have been horribly wrong.

A Day in the ACME Complaint Department: I thought it would be funny to do a one-sided phone call (Bob Newhart style) of a person in the ACME complaint department taking a call from an angry Wile E. Coyote, because one of their products had again detonated in his face and slammed him into the side of a mountain. 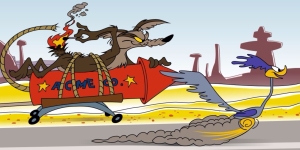 This is about to go horribly wrong.

Reasons to Throw Rocks at Things: There has to be several.

Why do Hillbillies Have Weird Faces: This popped up on my search term page. Some poor individual came to this blog looking for an answer to that question; I fear I’ve let them down.

Toad Lickers Unite: It is high time we illuminate the plight of the toad licker in this nation. 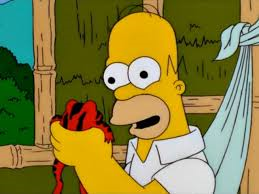 Homer is just one of the many downtrodden toad lickers.

A Temper Tantrum and a Mostly Jet Black Truck: This is a true story about a giant blowhard of a man and how he parked his jet black truck in the wrong place.

Let Me Explain: Another true story about the time I witnessed a co-worker try to explain to a supervisor why he had called-off on Friday. His story began with “I got arrested” and then got increasingly worse.

Let me know which of these posts should be finished and published. (Or more than one–there is a plethora.)

I live to do your bidding.

Beaker vs. Bieber: A Tale of the Tape

I stumbled upon this post from a few years ago and it made me chuckle. So here it is again.

There’s no denying it; it’s the question that we’ve all been asking ourselves.

It’s the question that haunts our dreams and torments our waking hours.

It’s the debate that has fractured marriages, ruined friendships, and spoiled countless family barbeques, when bitter arguments conclude with a meat fork in the side of Uncle Al’s head.

It has catalyzed barroom brawls, riots in the streets, and led to the declaration of martial law in Schenectady, New York.

It has resulted in a flood of 911 calls from people who are dazed, confused and in search of answers (and one guy who couldn’t find his car keys).

It has resulted in a flood of harried 911 operators (and one 911 operator who angrily uttered the phrase, “how should I know where your ****ing car keys are).

What is this debate: who would win in a throw-down between Justin Bieber and Beaker the muppet?

Beaker: He was sewn into full adulthood and hasn’t aged a day since.

Bieber: He grew up in Stratford, Canada. (By grew up, I mean he got chronologically older.)

Beaker: He is operated by puppeteer who has a hand up his butt.

Beaker: He speaks a language that seems to consist of only the word “meep” repeated over and over.

Bieber: He sings songs about…frankly I have no idea.

Beaker: He works as lab assistant for Dr. Bunsen Honeydew.

Bieber: He sings songs about…I’ve still got nothing.

Beaker: He always has a wild bug-eyed stare.

Strengths in a fight

Beaker: Working for Dr. Bunsen Honeydew, he’s been blown up, electrocuted, set on fire, shrunk, and deflated. Due to this he has developed an incredible resiliency.

Bieber: His many tussles with the paparazzi, glass doors, and a pissed off Selena Gomez, have toughened him.

Weaknesses in a fight

Beaker: He is primarily made of felt.

Bieber: He is Justin Bieber.

Who would win this battle? Here’s your chance to vote:

Ray-Ray is a Pretty Boy

You may have noticed I enjoy writing posts based on bizarre news stories. 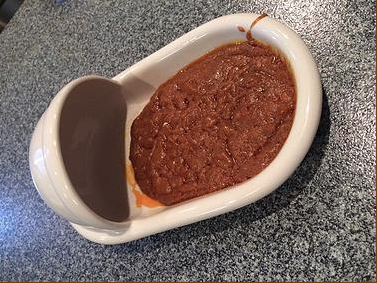 I wasn’t joking about the curry.

And in recent news.

Oakland Raiders linebacker, Ray-Ray Armstrong, is facing third-degree felony charges for–you’re gonna love this–taunting a K-9 service dog on the field prior to their game with the Pittsburgh Steelers.

The Raiders player barked at the dog, lifted his shirt and pounded his chest as he taunted the dog according to Chief Deputy Kevin Kraus.

Kraus said the player also told the deputy holding the K-9 to “send the dog.”

“The dog was going crazy,” Kraus said. “The deputy was trying to control the dog the best she could.”

The K-9 involved offered no comment, but simply got in his vehicle and drove away.

The sheriff’s office notified the Steelers, the NFL, and the Raiders of the investigation.

They also notified Ray-Ray’s mom, and were assured he would receive a whoopin’.

The Raiders signed Armstrong in October 2014 after the St. Louis Rams cut him for committing an excessive number of penalties…and for his propensity to lift his shirt, pound on his chest, and taunt random animals.

Ray-Ray claimed that it was the parrot who started it.

“Ray-Ray is a pretty-boy,” was the parrot’s only comment.

Armstrong could face serious charges as “taunting a police animal” is a third-degree felony in the Commonwealth of Pennsylvania.

Note: as a current resident of Western Pennsylvania I feel qualified to address this: we couldn’t care less if you want to taunt a police dog. As long as you don’t care if a police dog chomps you in the man bits. 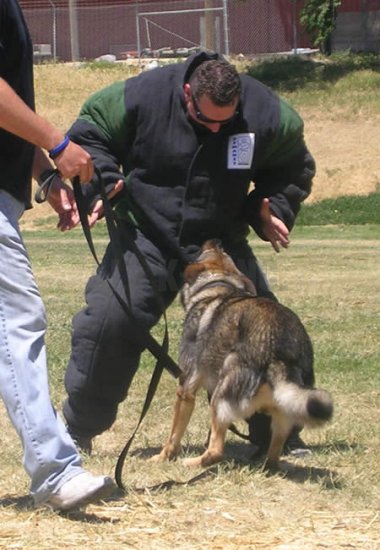 A few other things that are third-degree felonies in Pennsylvania.

The Allegheny County Sheriff’s department is currently investigating the incident.

The unfortunate thing for Ray-Ray (apart from his name) is there were about 50,000 witnesses.

If only he had taunted Justin Bieber instead. 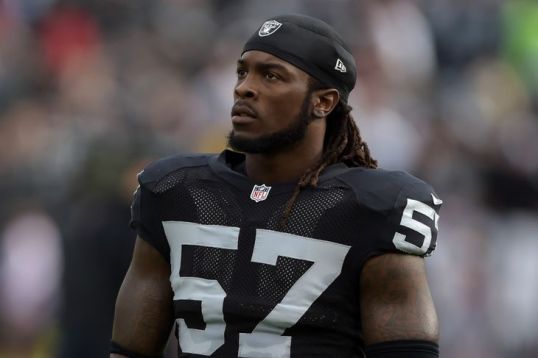 Alleged dog taunter, and recipient of an imminent whoopin’. 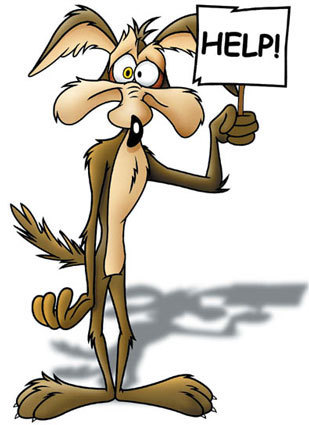 Wile E. and I are kindred spirits.

Several months ago I was having a dream.

In this dream my uncle was trying to chop my face off with an ax. He was chasing me through the woods and he seemed very determined in his efforts. He seemed to be enjoying himself a great deal. He was reminiscent of Jack Torrance from The Shining, but much more disheveled and maniacal. As ax wielding maniacs go–he was good at it.

Why would my uncle be chasing me through the woods with an ax? He has issues…and an ax.

Note: if my uncle were to chase me through the woods with an ax, it wouldn’t be the worst thing he’s done to me. He’s a miserable backstabbing rat-bastard of a human being, and I’m sugar-coating it. 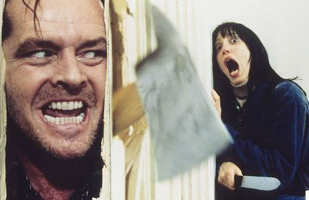 Anyway, I awoke from the dream and had a brilliant idea for a blog post, it would be the single funniest blog post ever written.

I quickly jotted the idea down, lest I should forget, and went back to sleep.

The next morning I looked at what I had written: Bad Idea Fireman.

Was it a bad idea to become a fireman?

Was it a bad idea a fireman had?

Were firemen a bad idea in general? That seems unlikely unless I was alluding to the firemen in Ray Bradbury’s dystopic tale, Fahrenheit 451. A great book, but not really full of laughs.

It’ll come to me I thought.

It still hasn’t months later, and I had forgotten about it until I stumbled upon it today in my drafts section.

Then I had a thought (it happens): my drafts section has become cluttered with half-written posts and neglected ideas; it’s time to change that.

Here’s a short list of some of the unfinished posts:

Why do Hillbillies Have Weird Faces?

This search term popped up on my stats page. It’s a compelling questioned that deserves an answer.

Why Sea-Monkeys are Better Than Your Cousins.

I’m not certain why this one wasn’t finished, it practically writes itself.

Don’t Say it to Your Boss.

I found a list of things not to say to your boss at a work relations website. The list was woefully inadequate; I could immediately think of a half dozen ill-advised things I’ve said to bosses, that weren’t on the list.

Where is Bigfoot and Why is He so Damned Hard to Find?

Answering this question would wipe out half of the programming on Animal Planet.

Your guess is as good as mine.