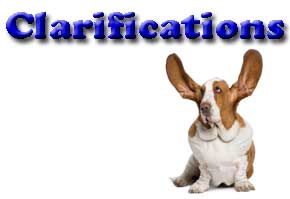 There may be some readers of this blog who have made an inference (due to no fault of my own) based upon things they think they may have read in this blog.

It is my desire to stem any disinformation that may persist and to eliminate even the most infinitesimal chance of confusion.

To be perfectly clear: I have absolutely no firsthand knowledge that any of my aunts have a pseudo-penis.

If you are laboring under the impression that one of my aunts has a pseudo-penis, that’s on you.

That being said, I have absolutely no firsthand knowledge that none of my aunts have a pseudo-penis.

I mean, it’s statistically unlikely that any of my aunts have a pseudo-penis, but I do have a lot of aunts.

And saying that something is statistically unlikely is pretty much the same as saying it is possible.

So let’s just leave it at this: while statistically unlikely, it’s entirely possible that one or more of my aunts have a pseudo-penis…but you didn’t get that from me.

I have a cousin that’s half spider monkey. She doesn’t have pseudo-penis, but she does have a prehensile tail. She’s a pleasant enough girl, but the way she wolfs down grubs at the dinner table is quite off-putting.

Her mother on the other hand (who may or may not have a pseudo-penis) is a horror. Remember the mother alien from Aliens? That big, ugly, drooling, murderous beast. That thing was a cherub compared to my cousin’s mother.

A cherub in comparison…and this thing doesn’t have a pseudo-penis.

I do have an uncle who menstruates. You may think that’s not physiologically possible, but he does it. He thinks nobody knows–everybody knows.

Grandma calls him a medical miracle, but that’s just because freak of nature sounds bad in the Christmas letter.

His wife has a pseudo-penis.

Correction: it is statistically possible that his wife has a pseudo-penis. I don’t want anyone getting the wrong idea.

And maybe certain family members will be less angry with me…they’re so touchy.

Final Note: aren’t you glad I didn’t include a picture of pseudo-penis in this post?

See how useful a prehensile tail can be.

7 thoughts on “Just a Quick Clarification”