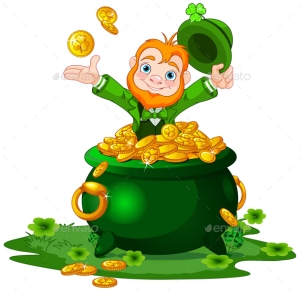 Tweedle McBumpers before the scandle.

In a tragic tale of misplaced trust and greed, a number of leprechauns from County Kerry, Ireland have lost their life savings to an elaborate Ponzi scheme.

While most of the leprechauns have declined to comment, one leprechaun, Tweedle McBumpers, has decided to open up about the events. “It’s tragic,” Tweedle said fighting back anger. “Most of us have lost everything. No more gold. No more pot to keep it in. You know that old phrase ‘he doesn’t have a pot to crap in’? Well that’s us. There’s nothing at the end of this leprechaun’s rainbow but despair and big vacant spot where a pot of gold should be.”

The sad empty spot where Tweedle kept his pot of gold.

The culprit behind the fraud was a smooth talking leprechaun named Moneybags Potfiller. Evidently Moneybags claimed to be investing in land on the east coast of Ireland, earmarked for a golf course and resort.

When several of the leprechauns ventured to the location of the future resort to check on their investment, they found nothing but an old farmhouse owned by the widow Margaret O’Malley.

She shooed them away with a broom.

“The whole thing is just so heartbreaking,” Tweedle said, “but I guess with a name like Moneybags Potfiller, we should have seen it coming.” 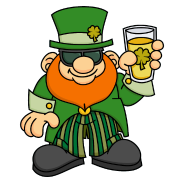 Moneybags Potfiller living it up on his ill-gotten gold.