A Wasp Nest and a Bad Idea 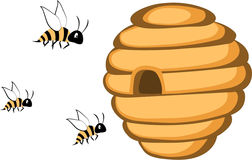 “How do you see this ending?” You ask your Uncle Finster.

“I don’t know what you mean?” Your Uncle Finster replies with a touch of petulance intertwined with genuine ignorance as he wildly swings a garden rake at the wasp nest directly above his head. He loses his balance and nearly tumbles from his perch, shakily atop the seat of a riding mower. He steadies himself before taking another wild swipe at the wasp nest.

You pause a moment to reformulate your words. “How do you imagine your state of being in, let’s say, ten minutes from now; do you think you’ll be well or not well?”

“I will be very well once I get rid of this wasp nest,” he says as he takes another swipe, missing the bottom of the nest by an inch. “Wasp nests are very dangerous.”

“They are very dangerous,” you acquiesce, “that’s why I’m standing at a distance and not directly under the wasp nest.”

“You have to break a few eggs to make an omelette.”

“But when you break an egg, wasps don’t fly out and sting in the face a thousand times.”

“Omelettes are delicious,” you agree. “A face full of wasp venom: slightly less so.”

Uncle Finster takes another wild swipe at the wasp nest, again barely missing it, this time losing his balance and nearly tumbling to the ground. “Are you here to help me or just to mock?”

“I’m definitely here to mock,” you clarify, “and I suspect to eventually call 911.”

Uncle Finster stops what he’s doing to look at you. “You always think the worst is going to happen.”

“This just reminds me of the time you had that hornet nest in your shed and you attempted to remove it with gasoline and a road flare.”

“You got rid of the shed too.”

“And we all look forward to you burning that one down.”

Undeterred, Uncle Finster takes another swipe at the nest, again barely missing, and again nearly tumbling to the ground, regaining his balance just in time to swat a wasp from his face.

“That mower seat isn’t the sturdiest thing to stand on,” you warn Uncle Finster.

“This is the sturdiest mower on the market; that’s why I bought it.”

“I thought you bought it because your last mower burned up in the shed.”

Uncle Finster ignores your previous comment. “Maybe if I jump in the air while I swing the rake.”

“Maybe I should just get your ladder,” you offer.

“It burned up in the shed too,” Uncle Finster tells you as he crouches down in preparation to jump.

“Of course it did,” you reply.

“What about last year?” you question.

“What about last year?” he demands.

Uncle Finster halted his assault on the wasp nest for a moment to stop and reflect. “Aunt Peggy was really mad that no one would eat her coleslaw after that, but let’s be honest: nobody was going to eat that coleslaw,” he pauses for a moment to reflect with disgust, “she puts prunes in it.”

“Actually, Uncle Philbert’s heart attack was the main thrust of my point.”

Uncle Finster straightens and addresses you with all seriousness, “He survived didn’t he?”

“What about the year cousin Erina got the lawn dart stuck in her head?”

Uncle Finster did destroy the wasp nest. The admitting nurse at the emergency room laughed hysterically at pictures you got on your phone. And the wasps rebuilt their nest in Uncle Finster’s new shed.

“It says here on your chart that you’re a dumbass.”