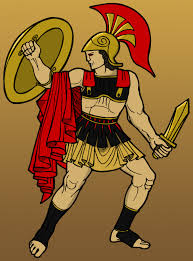 The Greek warrior Achilles has recently become vocal about his dissatisfaction with his health care coverage.

“Ridiculous waiting lists, exorbitant dinars out-of-pocket, and an inexplicable hole in my coverage,” were just some of the phrases used by Achilles to describe his frustration.

It seems the trouble started when Achilles discovered, what he had previously thought to be a comprehensive policy, wouldn’t cover a simple arrow wound to the heel.

“If I get gored by a minotaur it’s covered,” Achilles said in exasperation. “Trampled by a centaur: covered. Struck down by a lightning bolt from Zeus: covered. Transformed into a goat by Hera: covered. Eaten by the Kraken: fully covered. I mean, what’s the point in that. If you get eaten by the Kraken, it’s pretty much game over at that point!”

When pressed about the hole in Achilles coverage, Charon, the director of Styx River Health Care had the following response: “Achilles will be singing a different tune when he’s attacked by a cyclops or bitten by Cerberus. They always come crawling back…provided they can still crawl.”

“Is this how Trojan War heroes are treated?” Achilles asked in disgust. “The Trojan horse gets better treatment than I do, and he’s made of wood. I mean, look at how infected this wound is getting; it’s really starting to look nasty. I really think this wound is going to be the end of me.”

Recovering from a nasty bout of dry rot.

4 thoughts on “Achilles Frustrated by Hole in Health Coverage”