Just a typical day of commuting on Pennsylvania roadways.

National news was made earlier this week when a Port Authority bus fell into a sinkhole in Pittsburgh, Pennsylvania.

While the incident has been the butt of many jokes and has been turned into the subject of countless memes, it hasn’t been a laughing matter to PennDOT officials. “I don’t see what the big deal is,” said Ron Smith, a longtime PennDOT official who has nearly all of his fingers, “technically this sinkhole is only the fifth largest pothole in the great Commonwealth of Pennsylvania.”

When the veracity of that claim was challenged, Ron Smith the longtime PennDOT official who still has at least eight of his toes, pulled out photographic proof. “See this picture: it’s of a pothole in Lancaster County that swallowed up five Amish buggies, horses and all,” he declared defiantly. “Do you see the small Amish boy standing by the hole weeping–he’s fatherless now.”

Surely that’s the biggest pothole in the great Commonwealth of Pennsylvania, you’re probably thinking: not even close.

“There’s a pothole near Altoona,” continued Ron Smith the longtime PennDOT official who’s blind in one eye, but you can’t really tell, “that’s so big, they’ve turned it into a skate park.”

When queried as to why the potholes aren’t just fixed, Ron Smith the longtime PennDOT official who lost most of his body hair in a freak hot tar accident, replied derisively. “Don’t you think we’ve tried? We lost five good men trying to fill a pothole out near Scranton. Those were five quality PennDOT workers who put in two to three solid days of work a month.” He paused for a moment of reflection. “They had to bury empty caskets.”

“Doesn’t that screw-up traffic?” He was asked.

“Of course it does,” Ron Smith, the longtime PennDOT official cackled with laughter as two of the final three teeth fell from his mouth, “but that’s not PennDOT’s problem.”

When asked how long Satan had been running PennDOT, he became very quiet and replied solemnly, “a very long time.”

It was later learned from Ron Smith, the longtime PennDOT official who has a freakish amount of thick and robust nose hair despite the hot tar incident, that there was a pothole in Erie County so large, it was filled in with water and made an honorary Great Lake–people waterski there. 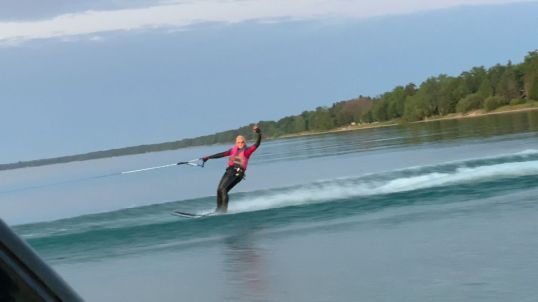 Waterskiing in a pothole near Erie, Pennsylvania.