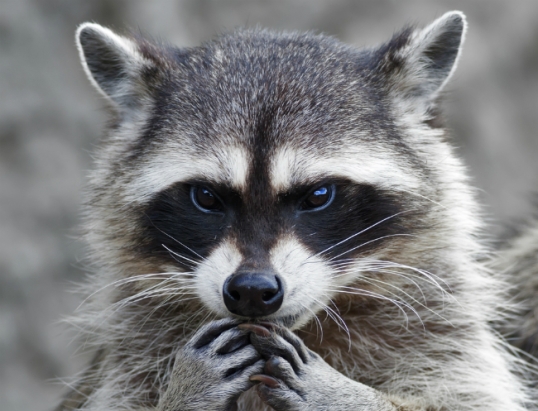 The following happened while I was employed as a quality control inspector at a steel coating plant outside of Pittsburgh, Pennsylvania.

It was about 6:15 AM as I crossed the plant floor toward the offices. The lights weren’t turned on yet, and though the sun was rising outside, the interior of the building was still a dark tangle of shadows.

In the distance I could see a short stumpy figure climbing the ladder to where the cranes and catwalks are.

I wondered why Jim, the crane operator, would be climbing into the crane so early, and thought it peculiar that he was doing it in the dark. As I looked more closely, I realized that it wasn’t Jim at all; it was the biggest raccoon I had ever seen. (Yes, I mistook a huge raccoon for Jim, if you had ever met Jim, you would understand.) The raccoon then disappeared into the darkness of the rafters and catwalks.

“I’ve seen that raccoon,” Ken, one of the private inspectors, told me. “It comes up from the Ohio River at daybreak and just disappears into the building somewhere.”

Suddenly Rick the foreman, who was sitting at his desk, jumped up, twirled around, and yelled at us, “they ain’t clean.”

Ken and I stood in a state of bewildered silence. Although neither of us said anything, we knew what each other was thinking: what the hell?

We speculated about what frightful trauma must have occurred to instill such a level of hatred for a furry animal. Maybe as a small child he was attacked by a racoon. Maybe as a teen, a pack of racoon toughs bullied and taunted him. Maybe they knocked the books from his hands as he awkwardly made his way through the school hallway. (Rick had the physical presence of Ichabod Crane, without the grace.)

This is what I think happened: it was prom night, the night Rick had dreamed of since he was a little boy. He had his tuxedo. He had the corsage that he would tenderly pin to her gown. It was his night to shine.

She was a little late, but that’s fashionable right? He paced impatiently as the minutes stretched into hours. Periodically he’d stop to check his watch as he would mumble under his breath, “she’ll be here any minute now.”

“Don’t ask a raccoon to the prom,” his friends had advised. “They’d rather scavenge through garbage cans than slow dance to Bryan Adams songs.”

But Rick was infatuated.

The night came and went without a word from her. Rick’s never gotten past the heartbreak and devastation. Now he has an irrational hatred of all raccoons.

The source of Rick’s heartbreak.