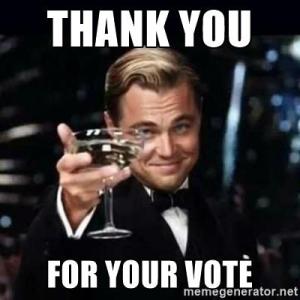 After two days of intense voting the results are in.

It seems that nobody is concerned that I am a peon…and wisely so.

But it is very disconcerting that nobody seems to care about the mad scientists under Oprah’s house.

When Oprah and her minions of evil genius monkeys are ruling the world with an iron fist, don’t come crying to me–I tried to warn you. When everything is all weepy feelings and book clubs and the world reeks of monkey feces and buttermilk pancakes, it’s on you.

As I have always suspected about the readers of this blog: you’re very cold hearted. Very few of you care about the plight of toad lickers in this country. (But they’ll be ones right at home during Oprah’s reign.)

More of you care about Hillbillies and their weird faces. Have you considered maybe hillbillies have weird faces because they lick toads? I’ll bet you haven’t.

About the same amount of you care about having reasons for throwing rocks at things.

You probably want to throw rocks at hillbillies and their weird faces, or their toad licking brethren.

You’re all so heartless.

But the most votes were cast for my former co-worker and his tragic conversation with a supervisor.

So my next post will be Let Me Explain.

Don’t throw rocks at my former co-worker–he has problems of his own.

I’ll bet you want to throw this at a toad licker–you’re so heartless.