It was a night in early March and western New York was being pounded by a typical lake-effect snowstorm.

As I plowed through the snow that was quickly accumulating, I tried to stay focused on the road to avoid any mishaps. I caught the image of a deer crossing sign out of the corner of my eye. These deer crossing signs are littered all over the countryside, they serve as a warning to motorists to slow down and proceed cautiously. While I’ve seen plenty of deer on country roads in western New York, I have never seen a deer anywhere near a deer crossing sign.

I amused myself with the mental image of lazy county workers driving around and throwing up deer crossing signs wherever they felt like it, swilling Pabst beer from cans, and laughing at the unsuspecting motorists who put false trust in the ill-placed signs.

I was jolted from my daydream by a brown blur in the road.

Holy crap it was a deer.

I slammed the brakes on: the worst thing you can do on slippery roads; I was skidding out of control.

Quick, I thought, steer away from the skid. No wait, that’s wrong you idiot.

Steer into the skid.

Steer into the skid!

It was too late. I had slid off the road and into a ravine. Everything was going black.

As I regained consciousness, I found myself in a small country cottage. There was a woman standing over me. She told me that her name was Annie and that she was nurse. Even though it seemed that I only had a bump on the head, she told me that I was badly hurt and that I needed rest. She seemed kindly, not at all unhinged or sinister.

She told me that she read my blog and that she was my number one fan. I let her read something new that I was working on. It was a new passion of mine: Jersey Shore fan fiction.

(Since Jersey Shore had been taken off the air my life had devolved into a drab and listless existence devoid of any meaning.)

As she brought me lunch, she told me that she didn’t like my Jersey Shore fan fiction. “I find it vulgar and disturbing,” she told me. “Especially the parts about Snooki.”

I informed her that I was done with humor and that Jersey Shore fan fiction was now my entire focus. She became enraged and dumped hot soup in my lap.

She quickly apologized and claimed that it was an accident.

“What about the fork you stuck in the side of my head?” I demanded.

“I don’t know how that happened?”

“Why would you even serve soup with a fork–that’s just weird?”

She became flustered and stormed from the room. I knew I had to get out of there.

I pulled the fork from the side of my head and began to gather my things as quickly as possible, hindered by the fact that my scrotum had just been scalded by piping hot split pea soup.

I made it as far as the front door when I heard a chilling voice from behind me.

“Where do you think you’re going?” she growled.

I peed a little bit. Something clanged against the back of my head, and everything went black again.

I awoke again with Annie standing over me. This time I was strapped to the bed and Annie was holding an ax.

“Then don’t chop off my foot and cauterize the wound with a blow torch.”

“What? Where are you getting this?” she seemed confused.

“From Misery. You know, Stephen King.”

“You thought that I was playing the part of some twisted character from a Stephen King novel?”

“No,” I hesitated. “I thought that you were playing the part of a twisted character from a movie based on a Stephen King novel. There were really quite a few differences between the two, and it would really help me out if I knew which one you were going for.”

“I can’t believe that’s what you thought I going to do, that is so hurtful. And after I took the time to clean the split pea soup from your scrotum.”

“I thought you…wait, you did what?”

“You’re using very hurtful words,” she said wiping a tear from her face.

“It just seemed liked the direction that things were heading. You stabbed in the head with a fork. You hit on me the back of the head with what felt like a bedpan. I’m strapped to this bed. Now you’re standing over me holding an ax, and I seem to be wearing adult diapers…and then there’s the thing about my scrotum.”

“Of course you’re wearing adult diapers–who has to wash those sheets, me or you?” she demanded.

“That’s right. And I’m holding this ax because I was chopping firewood so that I can build a fire to keep you warm. You don’t appreciate anything I do for you.” She threw the ax to the floor, grunted in indignation and stormed from the room again.

I didn’t see her for hours.

When she returned she was very calm and she had an emotionless look on her face that frightened me.

“I’ve made a decision,” she said coldly. “I have decided that you will write another humor post, and its subject will be your precious Jersey Shore.”

I refused. I would never sully the purity of Jersey Shore by mocking it.

“I anticipated that would be your reaction,” she said as her lips curled like burnt paper into a sinister grin. “I’d like you to meet someone.”

“Hello, I’m Doctor Phil, and I’m here to talk about your feelings.” Dr. Phil entered the room like a giant bald horror.

“I don’t want to talk about my feelings,” I blurted out as fear gripped me.

“But I don’t…how do the two of you even know each other?”

“Annie has had some issues in the past, I’ve helped her with them.”

“Bang up job on that one Dr. Phil, have you seen my adult diapers?”

He just shook his head at me as if he were scolding a child. “How does it make you feel to know that your critical statements hurt the feelings of others?”

“I felt that you might feel that way.” His head was shiny and his voice was hypnotic.

“Break both my legs; I only use them when I walk,” I pleaded, but Annie had left the room. “I LOVED YOU IN FRIED GREEN TOMATOES!” I screamed through the wall.

I wrote the post that she wanted. It was about how CNN’s The Situation Room would be different if it were actually hosted by The Situation, instead of that pasty-faced, abless dullard, Wolf Blitzer.

The Situation thinks NAFTA is where you get auto parts.

It was brilliant political and social commentary. If Dave Barry had read it, he would have thrown roses at my feet…or rocks at my head.

When Annie read it, she wept tears of joy.

I convinced her to undo my constraints so that we could celebrate properly.

“There’s one problem with this post,” I told her as she poured the champagne, “nobody’s ever going to read it.” I grabbed the laptop and hurled it into the fireplace. It shattered into pieces and began to burn.

As Annie fell to her knees screaming, I made my escape.

I’ve tried to write Jersey Shore fan fiction since then, but the pain is too great. So I am stuck writing this pathetic little humor blog.

I’ve started wearing adult diapers all the time; I like the freedom they give me. 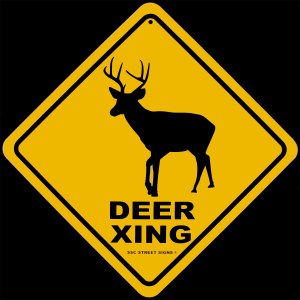 Seriously. You can’t spell out the word cross?
Stupid deer.

12 thoughts on “The Miserable Reason This Blog Still Exists”