This blog is veritable cornucopia of useful information.

In a previous post entitled: Just a Few Idiotprufs, the following passage appeared.

If Mike Tingley of Grand Blanc Township, Michigan, had read that blog post maybe this wouldn’t have happened: 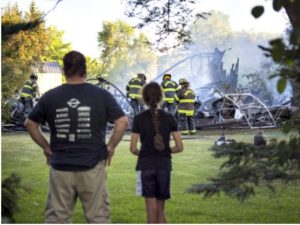 “That’ll take care of those bees.”

“The homeowner was doing something with a smoke bomb trying to get a bees nest out of the garage,” said Grand Blanc Fire Chief, Bob Burdette.

Mr. Tingley, while upset his garage has burned to the ground, is happy the bees are gone.

Mr. Tingley’s neighbor, whose garage is now the home for the bees in question and whose own house suffered a great deal of smoke damage, had the following to say about the incident: Mike’s always been a #$@$%@# idiot.

“We’ll be staying on high alert,” Fire Chief Burdette commented. “Evidently Mr. Tingley has 20 gallons of gasoline, a blowtorch, and a plan for getting rid of the carpenter ants infesting his front porch.”

The Fire Chief then paused for a moment before adding, “I certainly hope none of his children ever contract head lice.”

4 thoughts on “Up in Smoke”