Beware the Ides of March…and Salad With Anchovies

On March 15, 44 BC. Julius Caesar was stabbed to death in the Theatre of Pompey at a meeting of the senate by as many as 60 conspirators.

Note: The Theatre of Pompey was showing the remake of Footloose at the time. It was the second most disappointing part of Caesar’s day.

Upon realizing one the conspirators was his friend Brutus, he uttered the now infamous phrase, “Et tu Bluto.”

It was at that point Brutus became enraged and screamed, “Bluto is the character from the Popeye cartoons you imbecile; my name is Brutus. How many times do I have to tell you that?” Brutus then stabbed Caesar repeatedly.

Bluto and Brutus are not the same person. Just ask that smug tenth grade English teacher of yours.

Historians will tell you Julius Caesar’s assassination was politically motivated and the result of rising tensions between Caesar and the Senate. Historians will also tell you several Senators feared Caesar would overthrow the Senate in favor of tyranny. Historians are always blathering on about something in the past.

Well, historians are full of it.

I know the real story: everyone was just sick of Caesar forcing them to put anchovies on their salads.–anchovies are gross.

Final Note: the word assassination has the word ass in it twice. That amuses me more than it should. 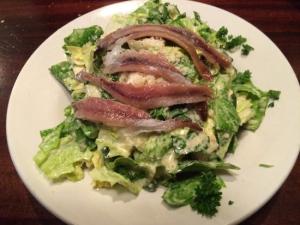 A delicious plate of Caesar Salad. Because there is nothing more appetizing than dead rotting fish.